Playing in a musical ensemble can contribute to a student’s development of team and community spirit, self-esteem, social interaction, self-discipline and leadership. Through Mowbray Band’s music program, we aim to foster an interest in and enjoyment of music. For many of our former-students, this early musical grounding has provided a foundation for their continued musical education and participation in ensembles throughout secondary school. 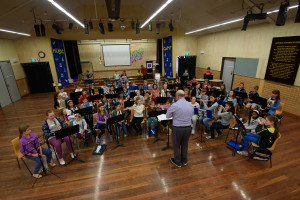 Training Band is a beginner ensemble for woodwind and brass and percussion students from Years 3 and 4 who are in their first year of learning. It is designed to introduce the children to ensemble playing as early as possible so that they can develop the skills needed to play in the senior Concert Band. The band is made up of flutes, clarinets, saxophones, trumpets, trombones, euphonium, bass guitar and percussion. The band is conducted by Mr Cameron Harker, and there are around 30 students who rehearse together every Thursday morning.

The concert band consists of children in Years 4-6 who have been playing for one year or more on their chosen instrument. Children progress to the Concert Band after having had a year of tuition and weekly rehearsals in the Training Band. The band has a number of performance opportunities each year including The North Shore Band Festival, various Community events, School Assemblies, Music Nights and the Mowbray Performing Arts Night. The band rehearses every Wednesday afternoon and consistent attendance and aptitude is expected. The band’s conductor, Mr Cameron Harker, aims to provide an interactive learning environment where children are able to grow in both the understanding and application of musical concepts.

The Performance band consists of children in Years 4-6 who have been playing for at least one year on their chosen instrument. Children progress to the Performance Band through the Audition process at the end of Term 4. Acceptance in the band is by invitation only. The band has a number of performance opportunities each year including Sydney Eisteddfods, The North Shore Band Festival and Music Nights on the top of school performances. The band rehearses every Thursday afternoon and consistent attendance and aptitude is expected. The band’s conductor, Mr Cameron Harker, aims to provide an interactive learning environment where children are able to excel their music knowledge and practice.

Each year the band ensembles have opportunities to perform on stage in the School Hall during special school events and at a recital evening. Senior ensembles usually participate in a variety of local Eisteddfods.

3. How to Join Mowbray Band

An annual fee is charged for participating in each Mowbray Public School Band to cover costs of the conductor, performances and competitions. This is adjusted annually to ensure it remains affordable. Students will need to have a private tutor (charged separately), in addition to weekly Band rehearsals.

An opportunity to try out different band musical instruments is held late in Term 4 each year. Information is sent out about a ‘Meet the Band’ session in the school Newsletter with an invitation to join a Band. You can also contact us.

Mowbray Band Students can either purchase or hire their instruments. Saxophones, clarinets, flutes, trombones, percussion instruments, french horns, euphoniums, tubas etc are available for hire through the Band Program, for a fee. If you require more information, please contact us.

Mowbray Band is a sub-committee of the Mowbray Public School P&C Association. We rely on parent involvement and very much appreciate them giving up their valuable time to keep the band program running smoothly.  There are many roles occupied by our parent volunteers:

If you have any queries about the Band programs, please contact us.